Review into collapse of Serco case.

Brian was commissioned by the Director of the Serious Fraud Office in May 2021 to investigate and report into the collapse of the Serco trial of R v Woods and Marshall in April 2021. His report was published by the Serious Fraud Office on 21 July 2022. The link to the Director’s statement and the Report and Annexes may be found at: https://www.sfo.gov.uk/2022/07/21/publication-of-brian-altman-qc-and-sir-david-calvert-smith-reviews/

In the spring of 2021, Brian was appointed as lead counsel to the Brook House Inquiry, whose terms of reference are to examine the mistreatment of detained individuals at the Brook House Immigration Removal Centre in Gatwick, then run by G4S, which was exposed in a BBC Panorama programme in September 2017.   For more information click here.

Brian Altman KC has been Lead Counsel in a public inquiry of national importance since 2017.

Brian was appointed as lead counsel to the Independent Inquiry into Child Sexual Abuse (IICSA) in January 2017. Brian has provided strategic and legal advice to the Chair and the Panel on all aspects of the Inquiry, as well as overseeing the large counsel team. He himself has been Lead Counsel in the Rochdale, Westminster, Wider Catholics, Lord Janner and Effective Leadership of Child Protection investigations and has appeared in all the hearings.

IICSA was set up by the then Home Secretary (the former Prime Minister, Theresa May) in 2015 to investigate institutional responses into allegations of child sexual abuse made against State and non-State institutions in England and Wales.

There have been 15 ‘investigations’ involving the Anglican Church, the Roman Catholic Church, Westminster Institutions, institutional failures into allegations against the late Lord Janner of Braunstone QC, Sir Cyril Smith MP and Rochdale, Nottingham and Lambeth local authorities, the Internet, Children in Custody and others.

The Inquiry is the largest statutory inquiry ever to be established by the Government. The Inquiry’s hearings have now ended, and it will publish its final report in 2022. The Inquiry has attracted a large amount of domestic and international publicity and continues to do so. By its finish it will have lasted in excess of six years.

Brian was featured in The Times on 17 December 2020 as their Lawyer of the Week for his work as lead counsel to the Independent Inquiry Into Child Sexual Abuse. 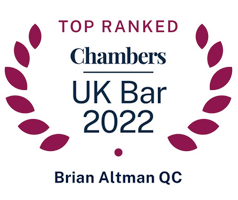